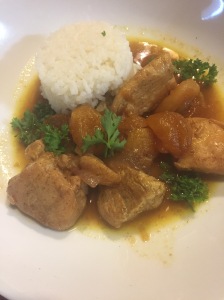 For my birthday last week I received a TAGINE!  I’ve been looking at them for the last year and even had one saved in my Amazon shopping cart.  My friends know me so well!  Great gift.   A Tagine is a shallow, round, (typically earthenware) pot (mine is cast iron) with a conical lid designed to keep moisture and flavors in.  The cast iron base makes it ideal for using on top of the stove or in the oven.  I seasoned the cast iron a few days ago so I was all set. 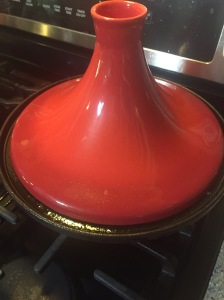 I was also gifted a cookbook so I would know where to begin.  The introduction in this cookbook, Tagines & Couscous, by Ghillie Basan, speaks to the fascinating cultures that left their mark on the region and are reflected in Moroccan cooking.   Classic Tangine dishes include lamb, dried prunes or apricots, preserved lemons, green olives, honey, onions, and spices.  Other recipes combine duck and dates, fish with lime, tomatoes and cilantro, or beef with beets and oranges.  The first problem I encountered was finding the right spices available where I live.   One of the spices, rãs-el-hanout, contains 15 different ingredients.  I had 11 of them and had never heard of a couple, so I got online and ordered it.  Ultimately it was less expensive than trying to make up my own.  I did put up some preserved lemons which will be ready in a few weeks.  Several recipes call for smen which is aged (or rancid) butter and is an acquired taste that I think I will pass on acquiring.  I will just use glee or regular unsalted butter.  I still hadn’t found an appropriate piece of lamb to use and I was anxious to experiment so I made a dish with chicken.  I kind of cobbled together a couple different recipes.  I’ll tell you what I did as well as what I would change the next time. 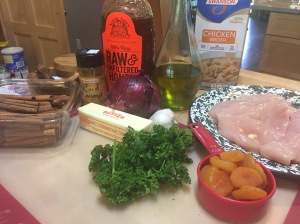 Combine 2 T olive oil, rãs el hanout, and 1 tsp salt.  Add chicken and turn well to coat.  Heat 1 T olive oil and 1 T butter in the base of the Tagine over medium heat.  Brown the chicken in batches and transfer to a plate.

Add the onion and a little salt to the Tagine and cook, uncovered, stirring occasionally until soft.  Add the garlic and cook until fragrant.

Add the chicken and the broth along with any juices that have accumulated on the plate into the Tagine.  Reduce the heat and simmer, covered, for 30 minutes.

While the chicken is cooking bring 1 cup water, cinnamon stick, apricots, and honey to a boil in a heavy sauce pan.  Cook until apricots are very tender, adding more liquid if necessary.  Once apricots are tender simmer until the liquid is reduced to a glaze.

About 10 minutes before the chicken is done add the apricots and syrup mixture to the Tagine.  Discard the cinnamon stick.

Cover and finish cooking.  Ladle chicken and apricots and broth into bowls with couscous (or rice if you don’t have couscous) and enjoy. 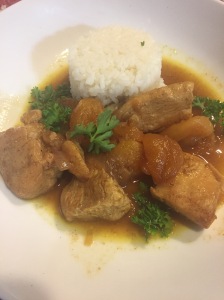 NOTE:  So I told you exactly what I did.  This is what I would change.  Next time I would increase the amount of spice to a tablespoon of rãs el hanout vs 2 tsp.  I would use chicken thighs instead of beast meat which, without skin and bone, I always find a little dry even in the Tagine.  I would also use cilantro because I think the flavor would be a better compliment than parsley.  And, of course, I need to buy some couscous.  The aroma was wonderful!  I’m excited to try a lamb dish next.

If you don’t have a Tagine you could prepare this same recipe in a heavy skillet with a lid for simmering.