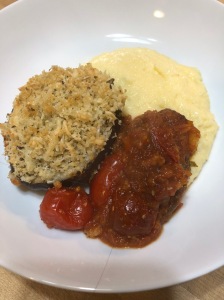 I’ve had fun fixing meals lately that are layered in a bowl.  Probably a bit of a fad thing but I’ve found several combinations that we like.  I usually use a variety of vegetables, a protein, and sometimes a sauce of some kind.  When I’m cooking for just the two of us, I serve our food restaurant style.  Saves on serving dishes and seems easier all around.  With the “bowl meals” sometimes the base is couscous, or quinoa, or rice.  In this recipe the base is polenta.  My friend Jane came across this recipe today and texted it to me.  She thought it was something I would like.   I happened to have all the ingredients.  At our house we love polenta.  We love eggplant.  And we love anything with tomatoes.  I make eggplant Parmesan fairly often and usually serve it with pasta.   This recipe changed things up a little from traditional eggplant Parmesan.  I modified the recipe as I prepared the dish tonight but felt it needed to be changed up just a bit more.  My ingredient list incorporates my changes.  I felt it needed more sauciness and more seasoning in the cheese/breadcrumb mixture.  But we loved it and had second helpings.

2 (13.5 oz) cans of cherry tomatoes OR the fresh tomatoe substitute above

1 T each of dried basil and oregano

Preheat your oven to 375 degrees.

Unless you find canned cherry tomatoes prepare your fresh tomatoes over medium heat in a heavy skillet.  Simmer until the tomatoes start to wilt or burst.

Once your tomatoes are ready stir in the fresh herbs and the garlic powder and transfer them to a casserole dish.

Cut your eggplant into 1 inch thick rounds and nestle them in among the tomatoes.

Generously brush the eggplant with olive oil and season with salt and pepper. 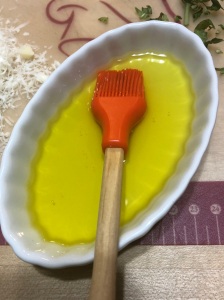 Bake for 25-30 minutes until the eggplant rounds are tender.  While the casserole is in the oven toss the panko, cheeses, salt, and dried herbs together with  2 T of olive oil in a medium bowl.

Also, while the eggplant rounds are cooking, prepare your polenta and keep it warm for serving.  Once the eggplant is tender, remove it from the oven and top each round with the cheese breadcrumb mixture.  Return the casserole to the oven and bake until the topping is a golden brown. 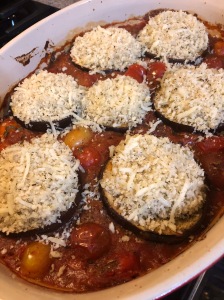 “Bowl” up and serve!  A spoonful of polenta, an eggplant round, and a spoonful of sauce.  Serve with fresh grated Parmesan.  If you follow the recipe with my modifications you will have more sauce in your bowl than shown below. 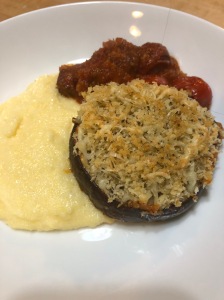 Enjoy this take on eggplant Parmesan.

NOTE:  While tonight is the first time I’ve made this, I think you could cook down whole or diced tomatoes, vs the cherry tomatoes, and get pretty much the same flavor profile.  A little chiffonade of fresh basil would look great on this dish.  I should have thought of that before I took my photos and we devoured our bowls.

Some time ago, I’m not sure where, I came across a recipe for meat pies and tucked it away along with the hundreds of other recipes I plan on making one day.  Today was the day for meat pies.  The weather is getting colder and comfort foods like this are extra appealing.  The ingredients are very basic and the dish comes together quickly, especially if you use pre-made pie crust.  However, it’s Sunday and I had lots of time, so I used my favorite King Arthur recipe for pie crust which I’ll also share here.  I made two pies and shared one with our neighbors.  She has been down with a cold or flu and no one feels like cooking when they’re sick.  He doesn’t like vegetables so this dish was perfect for sharing.

The beauty of this recipe is that you make it in your stand mixer. I’ve made crust recipes in my food processor before but this works perfectly every time.  Measure out your flour, salt and shortening and put it into the bowl of your stand mixer.  Use the beater attachment and mix until you have an even crumble. 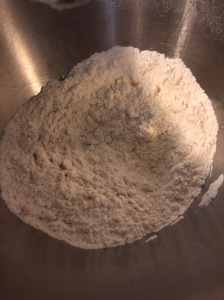 Add the butter and mix until there is an uneven crumble.  You still want to be able to see little chunks of butter.

Once the butter is mixed in and while the mixer is running slowly add the ice water until the mixture starts forming large clumps.  Stop adding water and stop the mixer.  If the clumps hold together restart the mixer and add just enough additional water to make the crust come together in one ball without any crumbs.  You’re done mixing.  Remove the dough to your work surface and divide it into two discs.  Wrap each disc in wax paper or parchment paper and refrigerate for at least 30 minutes.

One of the tricks I learned from King Arthur that makes so much sense is to make one larger and one smaller disc.  The larger disc for the bottom crust, the smaller one for the top. 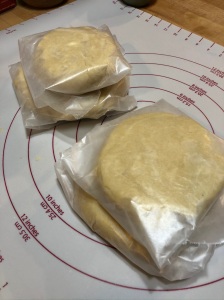 Now that the crust is made and chilling you’re ready to prepare the meat mixture.

Salt and pepper to taste

Preheat your oven to 375 degrees.  Peel, cut and rinse potatoes.  Cover with cold salted water, bring to a boil and simmer until potatoes are fork tender. 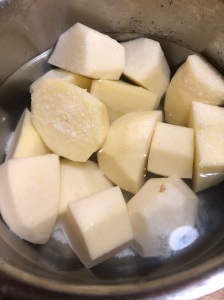 While the potatoes are cooking rough chop the onions.  Heat butter in a large heavy skillet and cook the onion just until it is translucent.. 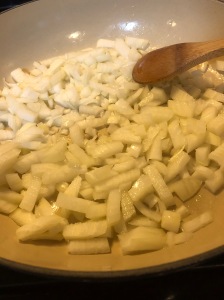 Add the pork and beef to the skillet with the onion and, over medium heat, cook until the meat is no longer pink.  Drain off excess fat but leave a little for flavor. 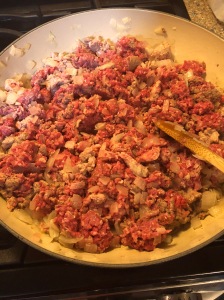 Season the meat with the poultry seasoning, cloves, and salt and pepper to taste.

Rice the potatoes (or mash) without any butter or cream.  Stir in just enough of the potato to bind the meat together.

Looks like cheese, but it’s just riced potatoes.  Now it’s time to roll out your pie crust.  The filling recipe makes 2 pies.  Put half of the meat mixture in each pie. 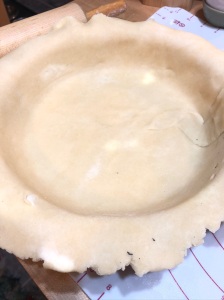 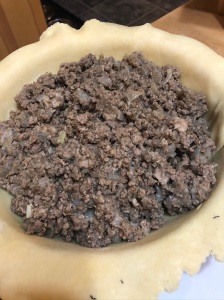 Roll out the top crust and cut vent slits. 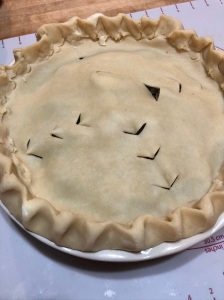 Bake for 50-60 minutes, until the crust is golden brown.  Slice and serve.

I served ours with steamed broccoli and a salad.  And catsup of course. 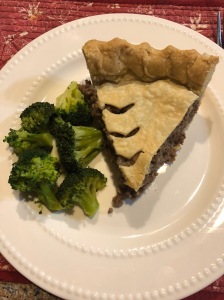 Meat pie is definitely a good comfort food for cold days and I will make it again.  The leftovers should reheat well and it may even taste better the second day than the first.

NOTE:  When I first read the recipe I thought the spice combo of poultry seasoning and ground cloves with a beef and pork dish was odd.  But it actually worked well.  However, you could change that up and use Italian seasoning and serve with a side of marinara or Mexican seasoning with a side of fresh salsa.  Endless possibilities.  I preferred using catsup with this recipe but you could make a gravy or barbecue sauce if that would be more to your liking.

As an aside, for years I always cooked potatoes in a pot with the lid on.  Awhile back someone told me potatoes should be simmered in a kettle with the lid off.  I googled it, because that’s what we all do now, and sure enough, the instructions for boiling potatoes say lid off.  My potatoes have always tasted fine but occasionally, I make an effort to do it the proper way now.