This weekend we had very special friends visit from out of town. Pasta dishes are always favorites with them so I decided to make pasta two ways. Two ways that were both new recipe interpretations for me which is only a safe thing to do if your guests love you unconditionally. One pasta was a red dish, the other was white. One was meatless, the other had sausage. Both of them turned out very well. I’m going to share the meatless red here. Angel hair pasta with oven roasted tomatoes…it’s what was for dinner and again for lunch the next day.

This recipe is only something you’ll want to try if you will be home all afternoon and if you love the smell of roasting garlic and tomato. Everyone who walked in that afternoon commented on the strong aroma of garlic.  You could roast the tomatoes without the garlic but the flavor would not be the same.  The first part of this dish is the time consuming part…not a lot of work, just time.

Get ready to roast your tomatoes. Preheat the oven to 350 with the racks in the top third of the oven. I combined different kinds of tomatoes…Romas, beefsteak, and small heirloom tomatoes.

Slice the romas and the beefsteaks. Leave the cherry/grape tomatoes whole. Put the tomatoes in a large bowl, add 1/2 cup of olive oil and toss the tomatoes to coat. Spread them out in a single layer on jelly roll pans. Peel and smash a dozen or so cloves of garlic and distribute between the two pans of tomatoes. Lightly salt. Turn the oven down to 225 and put the tomatoes in. Roast them for six hours switching the position of the pans after three hours.

I told you this process was not at all difficult. It won’t take long and the garlic aromas will begin to permeate the kitchen. These tomatoes are so yummy. You won’t ever want to buy sundried, jarred tomatoes again. Throw the garlic away. It will be tough. The flavors have married the tomatoes and olive oil.

Now for the pasta sauce.

20 or so kalamata olives coarsely chopped 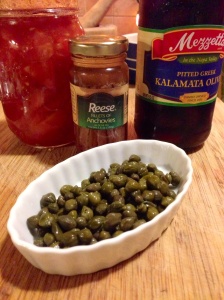 Bring salted water to a boil in a large pot and cook pasta according to package instructions.

Heat olive oil in a heavy skillet. Briefly sauté the garlic slices. Add the anchovy filets and sauté until they melt into the oil. Add the pepper flakes and tomato paste. Add the chopped tomatoes, the olives and capers, and the oven roasted tomatoes. Simmer until thoroughly heated.

Combine the sauce and pasta and toss. Add a half cup or so of the pasta water if necessary. Top with fresh grated asiago cheese. Serve with a tossed salad and some crusty bread.

If you have more than three cups of oven roasted tomatoes there are any number of uses for them in addition to just eating them straight up. They would be great in an omelet, on a sandwich, in a salad. I used the tomatoes I had left tonight when I roasted a pork loin with Brussels sprouts and baby Yukon gold potatoes. I added them to the vegetables when the cook time was almost up.

One thought on “Angel Hair Pasta with Oven Roasted Tomatoes”