When I’m scrolling through Facebook I see a lot of people posting recipes with pictures that look mouth watering.  So I ask, “have you made that?”  The most frequent response I get is, “no, but I’d like to.”  And then I’m a little leery.  What if someone accidentally left out a key ingredient?   We’ve all seen those pictures of Pinterest fails…recipes or projects that look easy and amazing and when someone attempts to replicate them they bear little resemblance to the original picture.  We had special friends coming for the weekend and a belated birthday to celebrate so when I saw this picture and recipe for a chocolate cake (that the person who posted had not yet made) I decided to give it a try anyway.  I can’t eat chocolate but everyone LOVED the cake and the icing so my efforts were worth the risk.  And I’ll make it again.  The other good thing about this particular recipe is that it made an 8”x8” cake which was the perfect size.

Whisk together the dry ingredients.

Add the egg, milk, oil and vanilla.  Beat on medium speed for 2 minute.

Gently stir in the boiling coffee.  The batter will be thin.  Pour into an 8”x8” pan that has been greased and floured.  Bake for 35 minutes.  Cool completely on a wire rack.

This was the intriguing part.  To me.  I’ve never made an icing like this!  Melt the chips in the microwave, stirring every 30 seconds until melted.  Once the chips are melted stir in the sour cream and vanilla.  Give it a good hard stir for a creamy consistency. 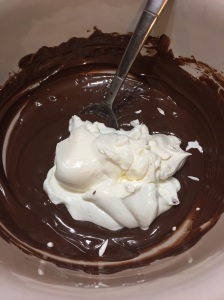 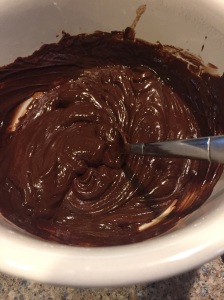 Viola!  You have icing that sets up beautifully.  Almost the consistency of fudge.  I inverted the cake and put it on a plate to ice but you could do it right in the pan.

I garnished the cake with fresh raspberries.  Slice and enjoy!

NOTE:  The cake is super moist.  I put it in the freezer for awhile prior to icing it…it is much easier to frost.  The recipe called for boiling water (or coffee) and I chose to use coffee.

I’m not sure whether this recipe would work doubled and baked in a 9×13 pan or as two layers.  Some recipes work that way, others don’t.