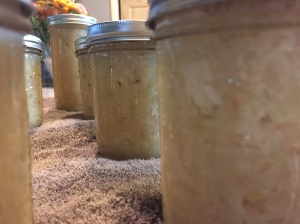 For the first time ever I turned cabbage into sauerkraut!  I’ve wanted to do this for a long time but was apprehensive about safely fermenting anything.  I must admit I was actually afraid.  Like I was the first time I used my pressure cooker.  This fermenting isn’t for the faint of heart.  I have a bit of a weak stomach and every day, once the cabbage starts to ferment, you need to skim the scum from the top.  I bought myself a special scum skimmer from Amazon to do the skimming.

Once during the fermentation process I was out of town for five days.  I kept thinking about the I Love Lucy episode where Lucy puts too much detergent into the washing machine and it is overflowing everywhere.  I had visions of scum and bubbles running over the sides of the crock and onto my kitchen floor.  That did not happen.   But fermenting cabbage was the first thing I smelled when I walked in the door.  No doubt about what the smell was.  I had to put Vicks under my nose and put on my heavy rubber gloves to do the skimming that day.  But the longer the cabbage worked the less it smelled until finally, after nearly five weeks, there was no scum and virtually no smell at all.  Today I took the towel off the top of the crock, removed the weight and the plate, and removed the cheesecloth.  My five heads of cabbage have turned into a crock full of beautiful, perfect sauerkraut!

Making your own sauerkraut does not require any special skills,  The only ingredients you need are cabbage and salt.  The only tools you need are a very sharp knife or mandolin, a large glass or ceramic crock of some sort, a scale to weigh the cabbage to get the salt to cabbage ratio correct, and a scum skimmer.  You have to be patient.  And it’s probably easier if you don’t have a really weak stomach. 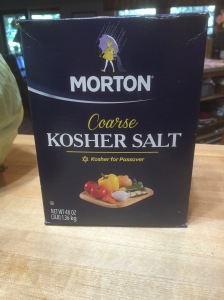 I used 5 large firm heads of cabbage.  Peel and discard the outer leaves.  Cut the cabbage in half and then into quarters and remove the core.

Using a sharp knife and or a mandolin shred the cabbage to about the thickness of a dime.  Weigh out 5 pounds of shredded cabbage and, in a large bowl, add 3 T of salt to the cabbage.  Let it stand until it starts to wilt and then pack it into the crock.  While you’re waiting for the first 5 pounds to wilt continue shredding. 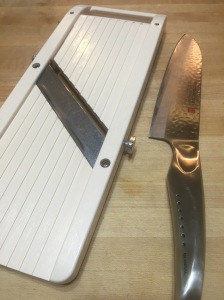 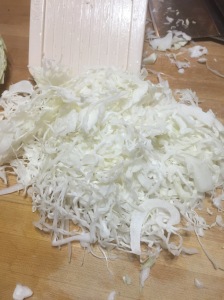 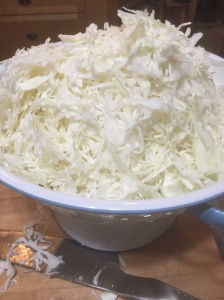 Continue shredding and salting until all of the cabbage is in the pickling container.  Allow for 3-4 inches of headspace in your crock.  Use your hands to press down on the cabbage until the juices flow and start to come to the top.  If the juices don’t cover the cabbage make up a brine using 1 1/2 T of salt to a quart of water.  Bring the salt water mixture to a boil.  Allow it to cool completely before adding it to the cabbage.

Cover the cabbage in the crock with cheesecloth tucking the edges down alongside the cabbage.  Put a plate on top of the cheesecloth and weigh it down to ensure that the cabbage remains immersed in the liquid.  I used an 8 pound medicine ball (an exercise weight) but you can use a brick wrapped in foil or inside a zip lock bag.

Now the fun begins.  Cover the crock with a towel,  It’s best kept at 70-75 degrees.  My house is never that warm but i kept it in the kitchen which is usually the warmest place and also most convenient for skimming.  Every day I lifted the towel to see what was happening.  It took several days but bubbles and scum began to form.  Each day after that I removed the weight, skimmed the scum, washed off and returned the weight, recovered the crock and waited for another day.  It took a couple days less than five weeks for the gas bubbles to stop forming.  Interestingly a salty crust formed on the outside of the crock.  It’s apparently very normal so don’t let it worry you. 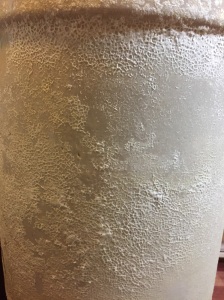 My 5 heads of cabbage made 23 pints of sauerkraut.  I added caraway seeds to one batch.

Looking forward to some Reuben  sandwiches, polish sausages or pork chops with homemade sauerkraut this winter.  Or just a dish of kraut to satisfy a salt craving.

A friend told me that his grandad used to make sauerkraut and when they were kids they would sneak a sip or two from the kraut crock.  I wouldn’t recommend that.