I think this is kind of a comfort dish.  Something your mom or grandma would have fixed for supper.  My grandmother (Mummu) used to make a boiled dinner which was very similar in taste except she would add potatoes and carrots.  There is definitely  nothing gourmet or exotic about boiled dinner but it’s a hearty meal.   I generally make country ribs with some kind of barbeque sauce and I might serve them with some boiled, buttered cabbage and red skin potatoes.  But I decided to use my slow cooker aka crockpot and let this go all day.  A slow cooker going always makes the house smell good to me, especially when I have sauerkraut or cabbage cooking.

2 pounds or so of pork country ribs

1 or 2 tart, firm apples (I used honey crisp but granny smith is best)

Peel, core and slice your apple(s).

Heat some olive oil, about a tablespoon, in a heavy skillet and saute the onions until they are tender and golden. 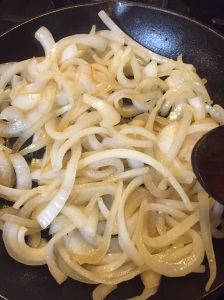 While the onions are cooking put the cabbage and apple in the slow cooker. 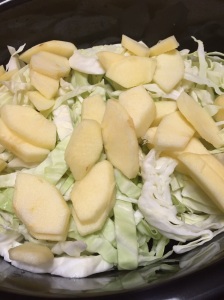 Generously season both sides of the ribs with salt, pepper and garlic powder.  Add the onion to the slow cooker and sear both sides of the seasoned ribs in the same skillet.  Add a little more olive oil if necessary. 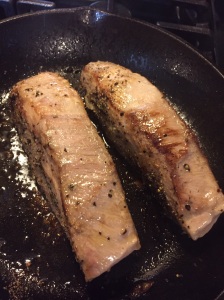 Put the ribs in the slow cooker atop the cabbage, apples and onions.

Deglaze your skillet with the cider vinegar scraping up any browned bits.  Add the brown sugar and broth to the skillet.  Remove from the heat and pour over the ribs in the slow cooker.  Set the slow cooker on low and let it do the rest of the work for you.  I let it cook for approximately 8 hours.  The pork was fall off the bones tender and the cabbage was perfect.

I served it with sweet potatoes whipped up with a little cream cheese, brown sugar and a shake of cinnamon. 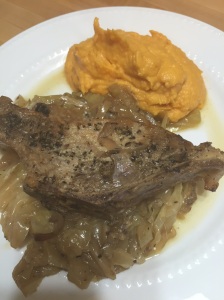 I loved it!  My husband got out the bottle of steak sauce.  He likes things a little more kicked up.  So next time I think I’ll go back to saucing the ribs and boiling the cabbage.

NOTE:  You could also add carrots and potatoes to the slow cooker and have your entire supper in one pot.  More like my grandmother’s boiled dinner.  The slow cooker will look like it’s too full but the cabbage cooks down significantly.