It was a Sunday of dueling pasta machines!  My dear friend Jane and I decided to make homemade pasta.  We both have pasta machines but are both seriously amateur pasta makers.  We made three different pasta dough recipes and decided on a favorite.  They all tasted great.  One was just a little easier to work with.  It’s a messy job for sure and you have to be patient.  We had flour everywhere and little bits of pasta all over the floor but toward the end of the day we were feeling a real sense of mastery!  We made ravioli and had them for dinner.  It was amazing if I say so myself.

I’ll share a couple of the recipes.  The one we used for our ravioli and the one that was our favorite.  The two main ingredients in every recipe are flour and eggs.

We used a mixer with a dough hook for this recipe.  Mix the flour and the salt.  With the mixer running add the eggs, one at a time.  Slowly add 1 T of the olive oil and continue to combine until the dough forms a ball.  Knead the dough on a floured surface until it becomes smooth and elastic.  About ten minues.  Divide into two balls and brush the surface of each ball with the remaining 1 T of olive oil.  Wrap in plastic wrap and allow the dough to rest for at least thirty minutes.

Once the dough has rested start working your pasta machine.  The dough has to be run through nearly a dozen times.  Until it is nearly paper thin. 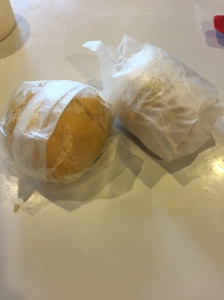 Allow the spinach to cool.  Blend the ingredients together in a food processor.  Put heaping teaspoons of filling about two inches apart on half a sheet of dough that has been brushed with an egg wash.  Fold the second half of the dough over like a blanket.  Using a pie crimper and a fork (it’s all we had) cut and seal each ravioli.  Put the completed ravioli on a baking sheet covered in parchment and lightly dusted with flour.  Set aside and allow them to dry slightly before cooking. 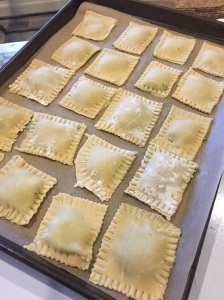 Bring a pot of salted water to a slow boil.  Cook the ravioli for a couple minutes after they float to the top.  If you have to cook in batches to prevent overcrowding keep the first batch warm.  Drizzle with a little olive oil and serve with the sauce of your choice. 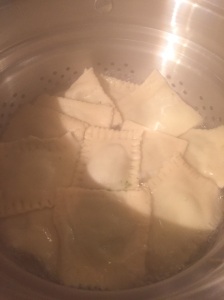 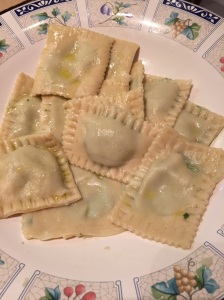 We served ours with a red sauce with spinach and sweet Italian sausage.  It was amazing. 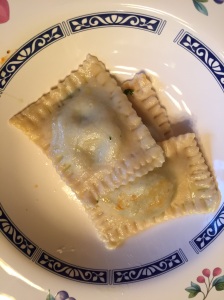 The second pasta dough recipe called for cake flour.  Interesting.  We made fettuccine and spaghetti noodles with this dough.  It was the easiest dough to work with.  It had more elasticity and went through the pasta machine with less difficulty.  Or maybe we were just getting a little better at the whole process.

We prepared this dough in the food processor.

Pulse the dry ingredients together to combine.  Whisk the eggs and olive oil together.  While the processor is running slowly add the eggs to the dry ingredients and continue running until the dough forms a ball.  Remove the dough to a floured surface and knead it for about 10 minutes until smooth and elastic.  Divide the dough into quarters and wrap each in plastic wrap.  Allow the dough to rest at least 15 minutes before running it through the pasta maker.

Run the dough through the pasta maker 10-12 times dusting the dough with flour and folding each time.  Adjust the thickness down every couple of passes.  We decided to make spaghetti and fettuccine so after allowing the sheets to rest for 30 minutes we ran them through the cutting attachment.  Hang the pasta on a drying rack or cook immediately.  We had already enjoyed a dinner of ravioli so we dried our pasta.  That drying rack in the laundry room now has a second function! 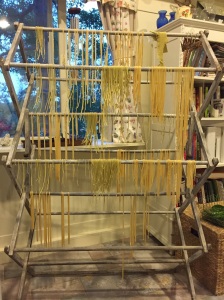 Pasta making 101.  We learned a lot!  And we had an absolutely wonderful time doing it.  We are no longer amateurs.  We are now pasta mavens!