One of our favorite vacation destinations is Santa Fe New Mexico. We love all of the arts, the people, the beautiful scenery and the food. Chili Rellenos are one of our favorites. We first had really good rellenos at the La Fonda, a hotel restaurant on the square in Santa Fe, and we loved them. I have tried a few different ingredient combinations and this one has become my make at home favorite. I’d rather go to Santa Fe and order them but mine are the next best thing. It’s a fairly time consuming process so I don’t make them very often.

The first thing I made today were the refried beans.

1 jalapeño seeded and in a small dice

Heat the grease or shortening in a large heavy skillet and add the onion.

Cook the onions over low heat, stirring occasionally, until the onions are caramelized. About 20 minutes. Be careful not to burn them. You want them to be golden and sweet.

Drain and rinse the beans. Add the beans and broth to the caramelized onions and cook about 10 minutes over low heat.

My bean smashing implement of choice is an old fashioned potato masher. Smash the beans and onions together. Add a little extra broth if the beans seem too dry. Dice the jalapeño and chop the cilantro.

Stir the pepper and cilantro into the beans. Add salt and pepper to taste. Transfer the beans to an oven safe dish and cover with Saran Wrap until you’re ready to heat them in the oven.

I sprinkle a little cheese on top of the beans before pitting them in the oven. (Queso fresco, queso Oaxaca, goat cheese or Monterey Jack.). When you’re ready heat in the oven at 350 for about 20 minutes until the cheese is melted and the beans are heated through.  If you want the beans to be vegetarian use crisco and vegetable broth.

Next I roast my peppers and prepare the Tomato-Pepper Sauce.

I line a large baking sheet with foil, preheat my oven to 425, spread the peppers out and roast them until they have a nice char on each side. 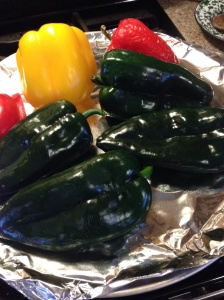 Turn the peppers at least once. It takes about 30 minutes total. Once the peppers are done put them in a covered bowl to steam and cool before peeling.

1 pint tomatoes in their juices

Heat the oil in a large heavy skillet over medium heat. Sauté the onions, roasted and diced peppers, and garlic together. Cook until tender, 15 minutes or so.

Stir in the tomatoes and cook until thickened and reduced by half.

Once the sauce is thickened and reduced transfer it to your food processor. Add the cilantro and honey and pulse until smooth.

Pour the sauce into a serving bowl and add salt and pepper to taste. Set aside until you’re ready to serve the Rellenos. The sauce is served at room temperature.

Last, but not least, we prepare the peppers and the filling.

Peel the roasted peppers and, using a sharp knife make a slit the length of the pepper and remove the seeds and membranes. Lay the peppers on paper towel until you’re ready to stuff them. Put the chickpeas, cheeses, and cilantro in the food processor and pulse until well blended. 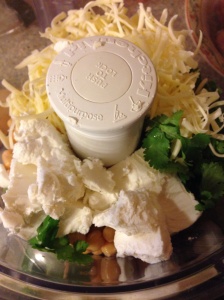 Divide the filling into 4 equal parts and shape into ovals. 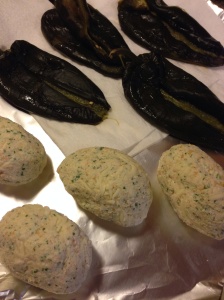 Put one of the ovals into each of the poblano peppers and, using your hands, gently close the pepper around the filling.

Heat peanut oil in a deep fryer or a heavy Dutch oven to 385 degrees.

Whisk the egg and beer together. Roll the pepper in flour, dip it into the egg mixture, and roll in the cornmeal. 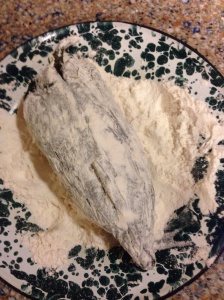 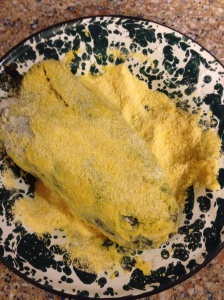 Gently lower a couple peppers into the hot oil. 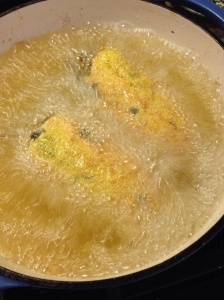 Fry until the peppers are golden brown turning once while they are frying. Remove peppers to paper towel to drain. Fry the remaining two peppers. 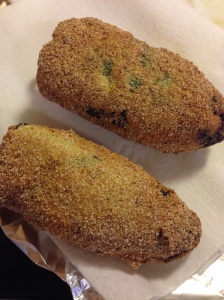 Serve hot with the refried beans and a generous serving of the tomato-pepper sauce. 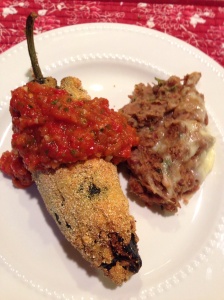 Mexican rice and chips and guacamole are both excellent sides with this dish. Garnish with lime wedges if you’d like. Excellent with a nice cold beer or a tequila drink. You might feel transported to Santa Fe.