On subzero days nothing is more comforting than a pot of soup. And it seems this is a winter that will require many pots of soup. Potato leek soup is one of my favorites.  And leeks remind me of some of the shenanigans my 87 year old father has recounted from his childhood. Apparently he and his friends would go out into the woods behind school on their lunch hour and pull up all the wild leeks they could find. Wild leeks that resembled little green onions. They would eat enough of them to get breath so bad the teacher would send them home for the afternoon. Eventually the teachers got wise to the pranking and forbade them eating leeks during school hours. This summer I’m going to look in the woods by my house for wild leeks. For now I’ll buy the leeks my grocery carries and sells by the pound when only a third of the leek is actually edible.

2 pounds or so of golden potatoes peeled and cubed

Slice the leeks and wash them well. Leeks have lots of sand and grit. 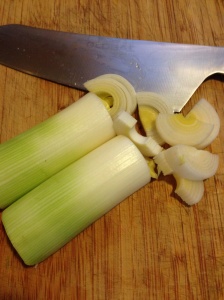 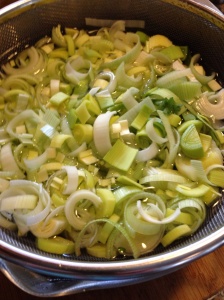 Melt the butter in your favorite soup kettle, add the leeks and salt and pepper, cover the pot and cook over low heat for about ten minutes. Be careful not to brown the leeks.

While the leeks are cooking roast the poblanos over a flame or in the oven until they have a nice char. Put them into a covered bowl to steam. Once the peppers have cooled peel and chop them.

Add the chopped peppers and the garlic to the leeks and stir for a minute or so until the garlic is fragrant. 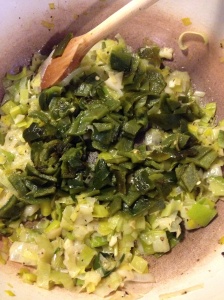 Once the potatoes are done use an immersion blender to purée the soup. Or you can use a standard blender and purée the soup in batches.

Stir in the thyme, salt and pepper to taste, and the Franks. If you choose, a cup of half-n-half will make the soup a little richer and creamier.

Garnish the soup with parsley and some shredded sharp cheddar. Potato, leek and roasted poblano soup. It’s what was for dinner.

NOTE:  I’m not a soup and crackers person but I do like croutons in my soup. I had leftover garlic bread from a pasta dinner a couple nights ago. I cubed the bread and dried it in the oven and it made perfect croutons.