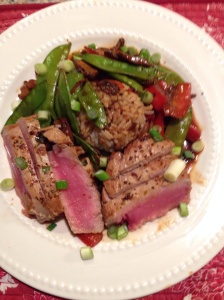 My absolute favorite ocean fish is tuna. The only kind of tuna I was exposed to growing up came in a can and was packed in oil. We ate it with miracle whip, chopped onion and maybe a little pickle relish on Bunny bread…Bunny bread was the UP Wonder bread. We also ate it mixed with egg noodles, cream of mushroom soup and peas.  The infamous tuna noodle casserole. In the early 1970s I was following a Weight Watcher’s diet which required 5 fish meals a week (shell fish for only one meal a week) and tuna in a can was my best friend. I wish I still had my Weight Watcher’s recipe cards because there were some truly bizarre concoctions using tuna!

This recipe is pure awesomeness and involves neither a can nor Weight Watchers. 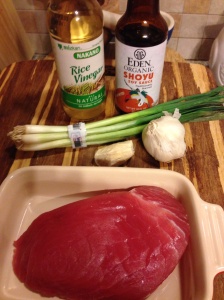 With a microplane grate both the garlic and ginger. 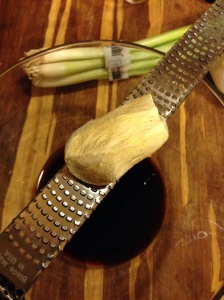 Whisk together all of the ingredients.

Place the tuna in a shallow dish and pour the marinade over the tuna.

Allow the tuna to marinate for 30-60 minutes. While the tuna marinates prepare the vegetables.

Heat canola oil in a heavy skillet over medium high heat. Add the mushrooms and peppers and cook until lightly browned, 4-5 minutes.

Add the garlic and snow peas and cook until the peas are lightly charred.

Add soy sauce, hoisin sauce, and stir to combine. Deglaze the pan with the ginger ale or orange juice. Keep warm while searing the tuna.

Heat 2 T peanut oil or canola oil in a heavy skillet like cast iron. Remove tuna from the marinade and pat dry. Season both sides with fresh cracked pepper. When the oil is very hot sear the tuna, one minute per side.

Remove the tuna from the skillet and allow it to rest for 5 minutes. Slice the tuna.

Serve with rice. Spoon the vegetables over the rice along with some of the sauce. Put the tuna on the plate and garnish with the green onions.

One of my favorite meals!

NOTE:  When I buy a piece of ginger I peel it, cut it into pieces and put it in zip lock bags in the freezer. Ginger is easy to grate when it’s frozen.

One thought on “Seared Tuna with Mushrooms, Snow Peas and Sweet Red Peppers”