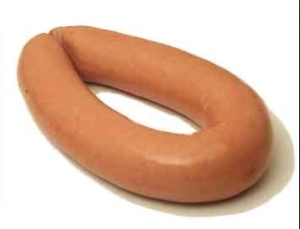 Yup. That’s a ring bologna. It’s not my personal ring bologna and I’m not actually going to cook it but I’m going to tell you about ring bologna. It’s the crowning glory of one of my Dad’s favorite dinners. He calls it Finnish tube steak. You take a ring bologna, just like the one in the picture. Make a slit in the top all the way around. You put it in the oven at 350 for about 15-20 minutes and watch for it to begin to split open. Fill the opening with brown sugar and catsup and bake for another 15-20 minutes. Serve with mashed potatoes and a can of green beans or corn. I grew up in a family of 5 kids; me and 4 brothers. We had this quite frequently for dinner along with the potatoes and canned vegetables. I don’t know if my mother made two of them at a time or if all 7 of us shared the one Finnish tube steak.   When my dad visited last summer I bought the best quality ring bologna I could find and made this for him. He was a happy man!

Since I’m not actually cooking one right now I had to get on line to find pictures and I discovered that ring bologna actually has it’s own Facebook page!

I’m not sure what the relationship is between the Green Bay Packers and ring bologna but this is ring bologna’s Facebook picture.  I apologize to all the Lion fans in my family for this picture.

The other day I was reading through a Finnish cookbook by Beatrice Ojakangas and came across a couple paragraphs about ring bologna. She says, “Ring bologna is as popular in Finland as wienies are in the United States. The Finns have many ways to cook it. They cut it into pieces and cook it over a campfire as we cook wienies. A crowning touch to a sauna party in Finland is to roast ring bologna pieces over the hot sauna stove and eat the pieces with hot mustard. With these, one drinks kalja or olut (beer).  Finns do not put the meat into bread as we do with weenies.”

Apparently the brown sugar and catsup bake is the Americanization of Finnish ring bologna.

In July of 1969 I traveled to Finland with my mummu (grandmother) and aunt and uncle. It was my grandmothers first visit back to her homeland in nearly 40 years. We spent a couple of weeks traveling the country and visiting family and friends. I had a vague recollection of the sauna/ring bologna experience so I got my “Air Travel Diary” out and read through the “places and events visited”.

July 13, 1969 we were in Kauhajoki visiting my grandfather’s relatives where I wrote, “He has a real nice home where we went to the sauna. The sauna had four rooms. First room was for undressing. Then you walked through the shower room and then into the hot sauna room. You suds up good and then back to the shower room to rinse off. Then you go into the sitting room before you dress and cook sauna bologna over a fire place.”  There was no mention in my journal about beer but the adults may have imbibed. For non-Finnish readers unfamiliar with Finnish sauna practices I’ll elaborate on that another day.

I’ve been having long morning conversations with my dad and we get on these off the wall topics like ring bologna. While looking for suitable pictures I came across a Ring Bologna in the Crockpot recipe. Dad asked me to write it down and send it to him. He wants me to write it twice so he can mail a copy to a fellow Finn who loves ring bologna as much as my Dad does. If I ever make it I promise to blog about it. In the meantime get on line and check it out…there is a whole ring bologna culture out there!