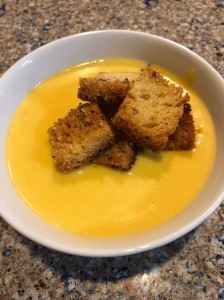 There was a restaurant that my friend Jane and I used to go to for lunch on Tuesdays when we felt like splurging a little on ourselves.  On those occasional Tuesdays when we wanted to enjoy a nice cocktail or glass of wine with our lunch, and have consistently good food and service we would go there.   The atmosphere reminded me of an upper class, members only men’s club from another era.  Beautiful table settings and good wine and top shelf liquor behind the bar.  Lots of dark wood, big stone fireplace, dim lighting, comfortable chairs…a very formal appearance.  You expect to look around the corner and see a billiard table or library, and men in suits smoking big cigars with a snifter of bourbon to cap off their meal.  Obviously my only experience involving “men’s clubs” is from novels or movies, but I think the friends who have joined us there for lunch would agree with my observations and know exactly the place I’m talking about.  One of the things that we frequently enjoyed there was their butternut squash soup.  It was served with a few salted and chopped pistachios and a small dollop of sour cream or creme fraiche in the center.  It always tasted so good!  Everything we ate there was excellent but I really liked the soup.  I looked through a lot of recipes and came up with an amalgam of two or three recipes.  It doesn’t taste quite the same but it was good.  The leftovers actually tasted even better.  Fresh squash is plentiful right not so it’s a perfect time to make it.

3-4 cups of broth (vegetable or chicken)

Salt and pepper to taste 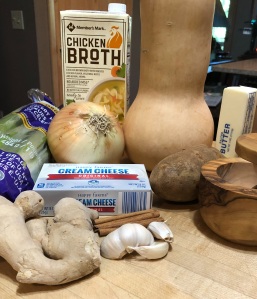 Dice the potato, onion, and celery and mince the garlic.  Peel, seed, and dice the squash. 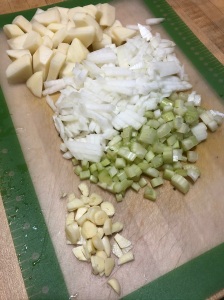 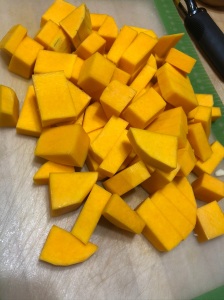 In a dutch oven, melt the butter and sweat the onion, celery, and potato. 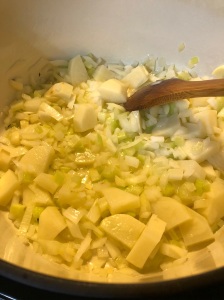 Add the garlic and sauté until fragrant.  Add in the butternut squash, the cinnamon sticks and ginger, and the broth.  Add salt and pepper to taste.  Bring to a boil.  Once it starts to boil reduce the heat and simmer for about an hour. 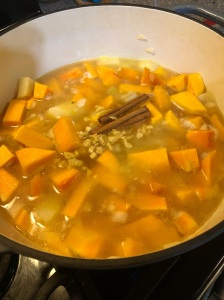 You want the squash and other vegetables to be nice and soft.  At this point you’ll want to remove and discard the cinnamon sticks. 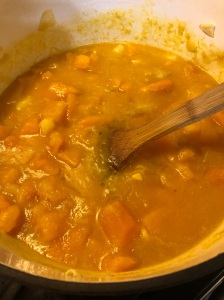 Cube up the cream cheese and stir in. 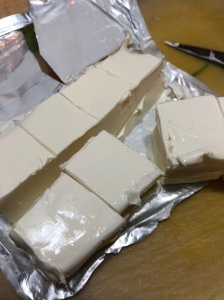 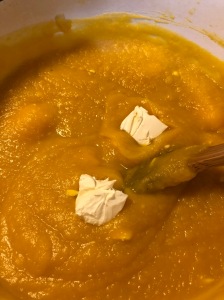 Use an immersion blender to get a nice, smooth consistency.

If you feel the soup is too thick add additional broth. 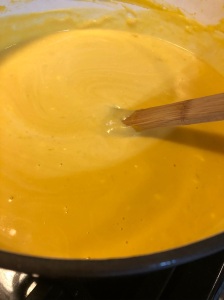 Now you’re ready to dish it up.  I didn’t have any pistachios or creme fraiche so I used some homemade garlic croutons.  Enjoy!

NOTE:  After eating this soup I’ve decided the potato didn’t add anything significant so I will not use that component next time.  I did add another cup or so of broth to mine after blending.

My friend Jane and I decided that the soup we enjoyed at the “men’s club” had a little brown sugar or maple syrup and was sweeter than this recipe.  Also, the flavor of ginger is more pronounced in this recipe.  Adjust to suit your palate.

It’s not for everyone.  For some people the consistency would be off-putting.  My husband did not like it at all, but I didn’t expect that he would.  And I actually liked it best the second day which is frequently true of soups.  If you like butternut squash and if you like puréed soups I think you’ll really enjoy this recipe.