I decided that rather than an ALL bologna cake I would make bologna sandwich spread and use bread for the layers.  Several years ago I made a sandwich cake for a Super Bowl party.  I made that “cake” with ham salad and chicken salad.  It was lovely to look at and tasted ok but I made a mistake and didn’t cut the crusts off the bread making it very difficult to slice. You nearly mangled the whole cake sawing through the crust.  I also learned that sandwich cakes are a real “thing” called smorgastarta, Swedish for sandwich cake.

2 loaves of a good sturdy bread 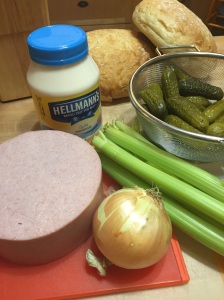 The shape of your bread does not matter.  Round, square, rectangular.  Just ensure that it is a good quality, sturdy bread so it doesn’t turn to mush when you add the filling.  Shave off the crusts with a serrated knife.

Grind your bologna and pickles in a food processor.

Small dice your celery and onion and add to the ground meat.   The vegetables give a little crunch to the sandwich spread.  Add mayo or miracle whip until the spread reaches your desired consistency.  Now you can begin assembling the cake.  Spread a thin layer of the icing on each layer and a generous amount of the sandwich spread.  Repeat.  Repeat.  Until you’ve used all of your layers.

When you begin icing the sides and top of the cake do just as you would with a real cake.  Start with a thin layer of icing to seal in the crumbs and then go back and add more icing and smooth out the sides and top. 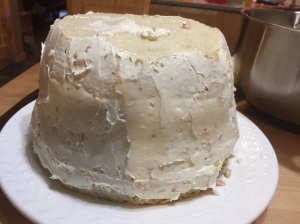 Decorate your cake with garnishes of your choosing.  I used fennel fronds, carrots, green onions, radishes and miniature heirloom tomatoes.

Voila!  I think my bologna cake is quite beautiful and it was appreciated and enjoyed by the birthday boy and most of the other guests.

NOTE:  It isn’t necessary to use bologna.  Any type of sandwich spread, sliced deli meats, lox, or hard boiled eggs would work.  Adding sliced vegetables like seedless cucumber, radishes, or onion would add some crunch and flavor.  I wouldn’t recommend using tomato slices which would make the bread wet and mushy.

I used the bread crusts to make breadcrumbs which I bag and freeze and croutons for soup or salad. 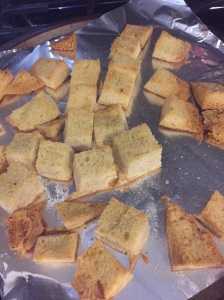