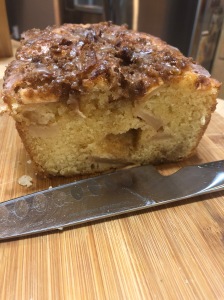 A couple days ago my friend Patti brought me a bag of Wolf River apples.  I had never heard of Wolf River apples.  No one else I asked had heard of them.  I’ve made a lot of pies, apple crisps, and apple sauce over the years, been to numerous orchards, and I’ve never met a Wolf River apple.  So I went where all curious people go…the internet.  Apparently Wolf River apples are one of the stars of an orchard in Northport Michigan.  People are said to travel from Detroit, Chicago, and even oversees to taste the long forgotten apple varieties at the Northport orchard including the Wolf River.  These apples are use mainly for cooking and are notable for their large size.  They are not the best eating apple, but they keep their shape when cooked and need very little additional sugar. 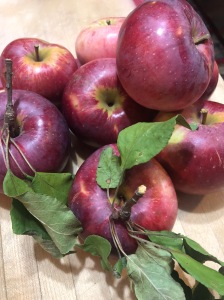 I learned something new.  And perhaps you did too.  Now that  I had the apples I wanted to use them for something, and  the next morning I spotted a recipe on FB for Amish Apple Fritter Bread.  I doubled the recipe and made two loaves so don’t be confused by my photos.  The bread is excellent!  The recipe comes from Fadma Akir’s Homecooking Page so I must give credit where credit is due.  The recipe is for a single loaf. 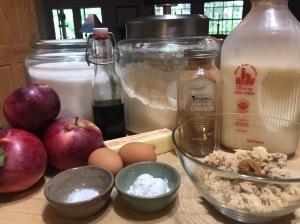 Preheat the oven to 350 degrees.

Line a loaf pan with parchment paper and spray with Pam.  Peel and dice the apples and toss with just enough sugar and cinnamon to coat.

Measure out the brown sugar and cinnamon and set aside. 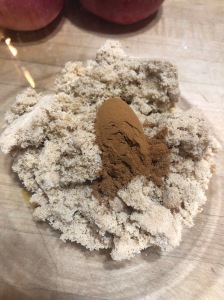 In a medium size bowl cream together the butter and sugar until smooth.  Beat in the eggs and vanilla.  (Remember, there are 4 eggs in the picture because I doubled the recipe.) 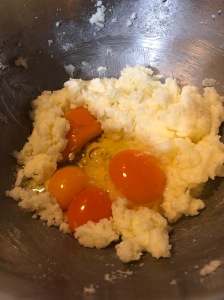 Whisk together the flour, baking powder and salt.  Stir into the butter and egg mixture.  Stir in the milk. 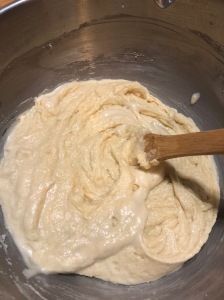 Spread half of the batter in the prepared loaf pan. 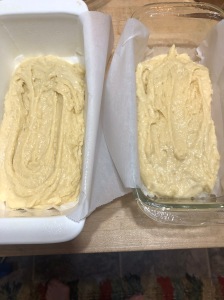 Top with half of the apples, gently pressing them into the batter. 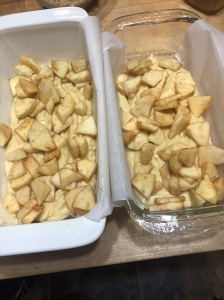 Repeat with the second half of the batter and apples.  Sprinkle the brown sugar and cinnamon mixture on the top. 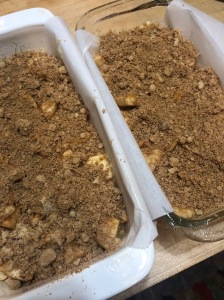 Bake for 60-70 minutes until a cake tester comes out clean.  Remove from the oven and cool for 30 minutes on a wire rack.  Mix the glaze while the bread is cooling.

Whisk together.  Once the bread has cooled for 30 minutes drizzle with the glaze. 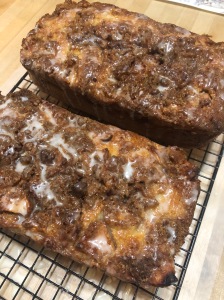 NOTE:  I used 2 cups of apples per loaf.

The bread is very moist and kind of a cross between a quick bread and a coffee cake.  I used the Wolf River Apples but I think any good baking apple like Braeburn, Jonathan, Cortland or Northern Spy would work well in this recipe. 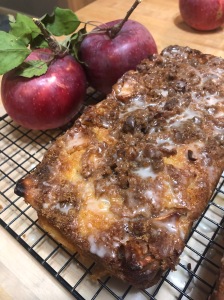